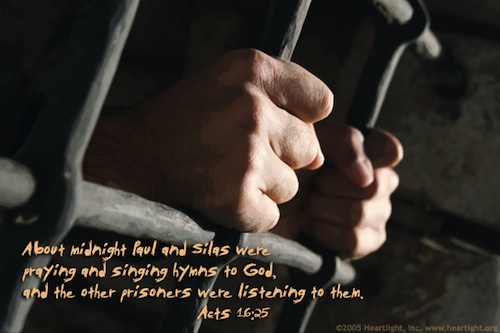 Acts 16:25-34
25 But about midnight Paul and Silas were praying and singing hymns of praise to God, and the prisoners were listening to them; 26 and suddenly there came a great earthquake, so that the foundations of the prison house were shaken; and immediately all the doors were opened and everyone’s chains were unfastened. 27 When the jailer awoke and saw the prison doors opened, he drew his sword and was about to kill himself, supposing that the prisoners had escaped. 28 But Paul cried out with a loud voice, saying, “Do not harm yourself, for we are all here!” 29 And he called for lights and rushed in, and trembling with fear he fell down before Paul and Silas, 30 and after he brought them out, he said, “Sirs, what must I do to be saved?” 31 They said, “Believe in the Lord Jesus, and you will be saved, you and your household.” 32 And they spoke the word of the Lord to him together with all who were in his house. 33 And he took them that very hour of the night and washed their wounds, and immediately he was baptized, he and all his household. 34 And he brought them into his house and set food before them, and rejoiced greatly, having believed in God with his whole household.

Before we get into this passage, let us keep in mind that God is the one doing the work here, not the apostles.  Certainly, they are following the leading of the Holy Spirit, but remember that this is about God, not humans.  Can you imagine what it would be like if you were sitting in a jail cell singing hymns and an earthquake tore off the shackles and broke open the gates?  What more is being the jailer, realizing that it is all over and deciding you might as well kill yourself because that’s a better alternative than what your boss will do to you in the morning?  “Oh yeah right, so you you’re saying these prisoners created an earthquake by singing, their chains fell off, and they got away?”

Now let’s put ourselves in the sandals of Paul and Silas.  If we were wrongly jailed and something happened where we had the opportunity to go free, would you have stopped and talked to the jailer, knowing very well he could recapture you?  I’d like to think I would be as honorable as Paul and Silas were, but I guess I won’t know unless I am in a similar situation.  What Paul and Silas did was display God’s grace to the jailer.  As a result, His eyes were opened and he was saved.  Recognize this: it wasn’t the incessant singing nor the miraculous earthquake, but the display of love and grace that won his heart for Christ.  Paul, Silas, and everyone else stayed in prison for the life of the jailer.  The jailer’s trembling and fear I do not believe was because of the earthquake, but of the mercy shown to him when they had no reason to…short of the love of Christ.  This display of love and grace is what drove the jailer to his knees trembling with fear because surely these men possessed something he had no knowledge about.  The singing was probably what gave him the information about salvation, the earthquake could have been brushed off as happenstance, but the display of love was unmistakable.

In verse 31, the men tell the jailer that in order to be saved from his corrupt heart and all that results from it, he simply has to “believe.”  Notice here they don’t tell him to repent and be baptized.  That is because this is what comes afterwards.  Our belief drives us to repentance and baptism (which we see happens later).  But what about this word, “believe”?  It’s a word that is used a lot in church language and is seen a lot in the bible of course, but do we know what it really means?  Do we understand what Paul and Silas were calling the jailer to do?  The original Greek word pisteuo (related to the Greek pistis which means faith), represents the idea of “to have confidence, to entrust yourself, and to take someone at their word.”  In other words, it is to trust God for what He says through His scriptures and His people as truth and act upon it.  For this is the only way we can capitulate on our belief: to act.  You might say you believe me that the chair behind you is safe to sit on, but you don’t fully put your trust in me until you sit on it, do you?  Maybe you are thinking, “well, how do I know who to listen to and believe and who not to?”  The test is if their words and actions line up with what the bible says.  So, if you are having trouble figuring out what church to go to or which preacher to believe, start by just simply reading the scriptures.  You will find a church that acts and a preacher that teaches exactly what the bible says.

Paul and Silas believed God would take care of them; this is why they were able to approach the jailer, convince him to not kill himself, and decide that they would all hang around until the morning so that he wouldn’t be punished.  If they were driven by worldly standards and only had belief in men, they would have been long gone before the sword pierced the jailer’s heart.  This is the saving power of God’s love and grace.  This is what the jailer was asking for in verse 30.  He didn’t care about being able to sing elegant songs or break out of prisons, but wanted to know how he could possess the most powerful gift in the universe: God’s unfailing and unconditional love.

We tend to remain shackled not by iron nor imprisoned by hateful humans; we remain imprisoned by our own unbelief.  Especially in our difficult situations we use God as a last resort when all other attempts to break free have failed.  Paul and Silas didn’t even attempt to break free. They just praised God because they trusted in Him.  It could have been their last night on earth, but as Paul says in Philippians 1:21 For to me, to live is Christ and to die is gain.  Maybe they were singing and praising God because they thought there were finally going to be freed of the bondage of living in humanity and the next day they would be united with Him! Yet we would sit and grumble and complain and try to get the jailer to let us free of our wrongful imprisonment.  The worship of Paul and Silas signified complete trust in God and His plan for their lives.  Why can’t we live like that?  Why can’t we completely trust God, especially when things look grim?  We see throughout the bible story after story of God’s glory being revealed in the difficult times of our lives.  We should welcome difficulty so as to see God be glorified all the more!

Our faith (trust, dependence) in God removes the shackles of our life.  In what areas of your life are you shackled by unbelief?