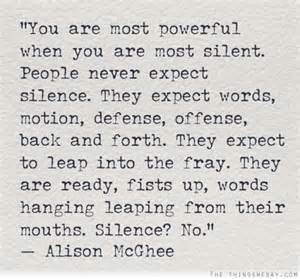 Mark 15:1-5
1 Early in the morning the chief priests with the elders and scribes and the whole Council, immediately held a consultation; and binding Jesus, they led Him away and delivered Him to Pilate. 2 Pilate questioned Him, “Are You the King of the Jews?” And He answered him, “It is as you say.” 3 The chief priests began to accuse Him harshly. 4 Then Pilate questioned Him again, saying, “Do You not answer? See how many charges they bring against You!” 5 But Jesus made no further answer; so Pilate was amazed.

What was so amazing about Jesus’ silence? He didn’t fight like a human; He fought like God. Jesus didn’t need to justify Himself before men because He understood that His justification came from above. He already knew what was coming and accepted it as the will of God so He spoke the truth and didn’t fight to defend Himself or run away. Pilate was amazed because Jesus was not afraid for His life. Do we respond the same way when people ridicule and mock us or even threaten us with death?

Our living in God’s Kingdom consists of recognizing who is in control. In John 19, we get more details of the conversation between Jesus and Pilate:

10 So Pilate said to Him, “You do not speak to me? Do You not know that I have authority to release You, and I have authority to crucify You?” 11 Jesus answered, “You would have no authority over Me, unless it had been given you from above; for this reason he who delivered Me to you has the greater sin.”

Who are we to think we have authority on earth? Man gives himself authority and tries to rule it over others. The Pharisees did this with God’s Law, using it as a method of control and creating social stature. Jesus clearly lets Pilate know, however, that the authority he has been given to prosecute Jesus in this way comes from God because it is what God has allowed him to do. The same thing was seen in the opening chapter of Job, when God gave Satan authority to test and try Job. The comfort, however, that Jesus extended to Pilate is the revelation that he was just a cog in the machine of what was happening. No guilt befell upon Pilate as for what was about to happen; he was innocent. Sometimes we look at him in this story as one of the “bad guys,” but in reality it was not his fault that Jesus was crucified.

How would you respond? Would you accept the “fate” that God has laid before you or would you defend yourself and fight for your life? This is why Jesus needed to pray in the Garden of Gethsemane. This is why Jesus told His disciples to pray. The temptation to respond to this situation as a human could easily have changed the outcome of the whole story. This is why it is so crucial for us to maintain our relationship with our Heavenly Father, so we know that regardless of what happens to us, He is in control. It is easy for us to say God is in control, but when trying situations arise, our faith in Him and relationship with Him will be challenged. When we are in communion with God, we don’t have to defend ourselves because He will defend us when it is necessary. Instead of worrying and scratching to stay alive, Jesus put it all in the hands of His Heavenly Father and He was able to remain calm and at peace. This causes astonishment for those who do not have a similar relationship with God.

Are you close enough with God to put your life in His hands? Would you be able to give a similar silent defense today if you were arrested and tried for your life? If not, how can you strengthen your relationship with God so that your only defense is trusting in Him?