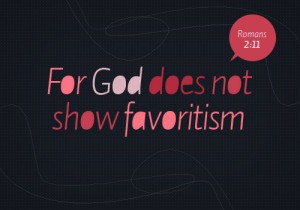 Acts 10:34-38
34 Opening his mouth, Peter said: “I most certainly understand now that God is not one to show partiality, 35 but in every nation the man who fears Him and does what is right is welcome to Him. 36 “The word which He sent to the sons of Israel, preaching peace through Jesus Christ (He is Lord of all)- 37 you yourselves know the thing which took place throughout all Judea, starting from Galilee, after the baptism which John proclaimed. 38 “You know of Jesus of Nazareth, how God anointed Him with the Holy Spirit and with power, and how He went about doing good and healing all who were oppressed by the devil, for God was with Him.

There are two important supporting passages that go along with this one that we must keep in mind.  The first seems like the antithesis from Romans 2.  The Apostle Paul is telling the Romans that there is no special treatment for sinners as a whole and that the judgment for all (Jew or Gentile) is death for sinfulness:

The second might be a better-known verse that we quote often but may not fully appreciate or understand the depth of Jesus’ statement in Matthew 5:

Until the ministry of Christ, which was sealed with the pouring out of the Holy Spirit, Israel was God’s only chosen people.  The Jews were considered people of God, regardless of their sinfulness and misgivings, and everyone else seemed to be pretty much screwed unless they converted to Judaism.  We have since taken that sentiment and carried it over to Christianity where we tend to look at our relationship with God as a prideful status to boast about instead of a position to use for the good of others.

Yesterday we talked about being a good leader and that good leaders are good followers.  As followers of Christ, we are called to lead others to Him.  As leaders we are expected to use the position we have been given to serve others, not to be served.  Jesus Himself, who is the very Son of God, said in Mark 10:

He took His position as God on earth not to lord it over others, but to better serve others in revealing the Kingdom of God.  I say this to reveal the travesty that has become the Christian religion these days of looking down upon “sinners” just as the Pharisees did.  We see people caught up in sinfulness and don’t see them the way God does: broken, despaired, and in need of the hope of Jesus Christ.  We instead see them as lesser beings who “just don’t get it” and we walk away shaking our heads.  Seriously?  Is this not the very thing Jesus taught against?  If He shows no impartiality, then who are we to show partiality?  If a homeless man walks into a church, will we welcome him in or will we ignore him?  This has grown to be a common analogy to expose our own religiosity, but sincerely stop and think about it.  How would someone who doesn’t look or act like the general population of your church be received?  You should be honored that they chose to come to that church instead of left feeling awkward that “one of these is not like the others.”  In Luke 15, Jesus exemplifies this very principle and exposes the iniquity of the self righteous religious elite:

Jesus isn’t just Lord of the Jews.  Jesus isn’t just Lord of the Christians.  Jesus is Lord of all.   Our belief in Him or how well we follow Him doesn’t change who He is or His status in the universe.  Sometimes we tend to think that His deity relies upon us or His majesty is dependent upon our own righteousness.  We see here Peter’s words that He is constant and we are the changing ones.  Our closeness with Him is dependent upon our recognizing who He is and responding to it.  He’s already done His part; will you do yours?  All are welcome to Him, but not all will receive Him.